During the AFICTIONADOS festival, the university of Nîmes hosted Michèle Clément, Renaissance specialist, who will come to present his future book on the notion of “common culture”. 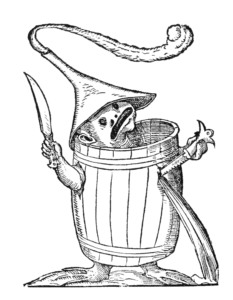 Common culture during the Renaissance ?

Alongside the idea of culture serving as a principle of distinction and redefinition of the European elites during the Renaissance, we can try to look for a shared culture in which “high” culture and unscholarly culture mutually nourished each other. It has been said that culture affirms and renews the “distinction” (Bourdieu), but it is less said that culture is an infiltration agent in social impermeabilities, which were even stronger in the Ancien Régime than today. Certain theses in the 20th century have attempted to show either the de-hierarchisation of cultural objects (B. Lahire and post-Bourdieu French sociology) or the legitimacy of cultural objects that are a priori despised (Cultural Studies). This is not what we are dealing with here, but social porosity. Only social porosity makes it possible to create an ‘imagined community’, i.e. a people, to perceive the outline of a people that would exist to share a memory, a heritage, songs, games, rites… This ‘people’, if it is in the present a fantasy stirred up by politicians, a people that is still missing, perhaps it is perceptible in the past, in the traces that the past has left?

Michèle Clément is a lecturer at the University of Lyon 2, where she teaches and studies French literature of the Renaissance. Her early works focused on Baroque writing (Une Poétique de crise : poètes baroques et mystiques (1570-1660, 1996). In 2005, she published a book on Le Cynisme à la Renaissance, edited by three Renaissance poets: Marguerite de Navarre (2001), Jacques Grévin (2001) and Maurice Scève (2013 and 2019). Her work today focuses on Lyon’s humanism, the history of books (Privilèges d’auteurs et d’autrices en France (XVIème-XVIIème siècles), in collaboration with Edwige Keller-Rahbé, 2017) and the history of women’s writing in the Renaissance.